In Defense of Hitchhiking


It was a little after noon Friday when I saw the cryptic email requesting prayers for two young men whose lives might be in danger. No names were given. About an hour later my son got a short text message on his cell phone, again requesting prayers. This time his brother threw a little light on the situation. He told us that there was a news black-out on the fact that some boys had probably been kidnapped the previous evening. Close to Shabbat the news finally confirmed what the cell phones and emails had been relaying. Three boys had indeed been abducted from the spot where they were standing waiting for rides home Thursday night.

Unfortunately this was not the first time we had faced such terrible news. Each time, though, it hits like a punch in the stomach. Before lighting my candles I recited a couple chapters of psalms, put a little extra money in the Tzedakah box, and begged The Almighty for a miracle.

When I entered the synagogue Friday night the mood was somber.  As services began, though, we all seemed to enter the spirit of Shabbat. It was when I recited the words praising HaShem, Who sustains the living with kindness, revives the dead with His abundant mercy, supports the fallen, and heals the sick, and releases the imprisoned, and maintains His faith to those who sleep in the dust  that I felt comfort. HaShem is in charge. The army and government were doing all they could to free the boys. 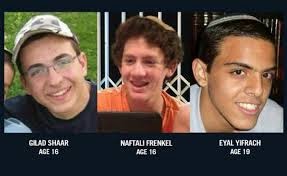 Our prayers only intensified. All over the country we gathered together to pray, learn, give tzedakah, and do acts of loving kindness, hoping that our actions would bring the boys safely home.

Most of us feel a closeness with one another as the tragedy binds us. Unfortunately, there are those who like to point fingers of blame. The government should/shouldn’t have done this or that. The army could have done more or less. Then there are those who like to blame the victims. They should not have been hitchhiking. Naftali, Gilad, and Eyal did not do anything wrong. The terrorists who kidnapped them are guilty and we should never forget that.

Hitchhiking in Israel is a way of life. In light of that I am reposting an article I wrote two years ago.

My first experience with a trampist, as a hitchhiker is called in Hebrew, was in the summer of '84. My husband and I, along with our four children, were spending a month in Israel. In reality, it was an unofficial pilot trip, but we called it a vacation. And a vacation it was! We mapped out tourist routes, rented a car, and were determined to see the country. Back home we had a roomy, six-seat Ford LTD. At the rental agency we were happy to take what we could get. What we could get was an European compact with vinyl seats, no air-conditioning, and seat belts only in the front. My husband took his place in the driver's seat.  The car seat, with the baby in it, was buckled into the passenger seat. I stuffed myself in the back with the other three children. Given the circumstances I was prepared for lots of complaining, kicking, and crying. Perhaps, because we were all in vacation mode there was little of that.

Our first stop on our first outing was Jericho. As we finished our popsicles and were ready to move on, we noticed a handful of soldiers, all waiting for rides.

"There's room for one soldier, isn't there?" my husband asked.

Enthusiastic Zionists that we were, no one objected to crowding one more body into the sticky backseat. The soldier positioned his M16 so that it was not aimed at anyone and made himself comfortable. There was little that we, an observant family from America, had in common with this native-born, bare-headed Israeli. Still, it is always good for Jews to get acquainted with one another even if they have different backgrounds and philosophies. As we searched for a topic of conversation, my husband casually mentioned that we were on our way to Beit Shean. At this point the soldier got very excited. With his high school English and my husband's synagogue Hebrew it soon became clear that we were on the wrong road. In just a matter of minutes my husband had turned around and returned the soldier to the hitchhiking post. A few more minutes later, the right road was found on the map and we were on our way, thankful to our trampist to have avoided a long detour.

Trampists are not only helpful finding the right roads and good shortcuts. I had a rider once who held a throw-up bag for my carsick daughter the whole hour ride to Jerusalem. Another hitchhiker clued me in on a great place to stay for our vacation in the Golan. There was the time my husband and I, both dressed up to go to a wedding, had a flat tire. Guess who changed it! The trampist!

Unsurprisingly, relatives in America are somewhat scandalized at our calm approach to giving and getting rides. Tragedies have happened. Nachson Wachsman, the Israeli soldier who was kidnapped while hitchhiking and murdered in 1994, is a household word. Thousands remember being at the special prayer service for him at the Kotel and the failed rescue operation the following evening. Twelve years later Eliayahu Asheri was abducted from a hitchhiking post and murdered by Arab terrorists.  For three days Israelis from all over the country searched for him, praying he was alive. When his body was finally found the country mourned and thousands attended his funeral on the third of Tammuz.  Still, hitchhiking in Israel is not the dangerous exploit it is in America.

Of course, when our children were growing up we gave them all sorts of guidelines about where they could tramp and from whom they could accept a ride. And, as teen-agers, they did not always listen to our advice. More than once, we drove by some forbidden junction only to see one of our children standing there with his finger out. Although the kid definitely had egg on his face, we did stop for him and he was grateful for the lift.

Tramping and giving rides is a great way to meet people. More than once I have heard stories of drivers loaning their car to a trampist so the trampist could arrive at a wedding or job interview on time. These were always second-hand stories and I had my suspicions about the truth of them. Then my son and his friend were tramping to a small village in the Negev for Shabbat. They had a pleasant ride with a driver from Beersheva. This driver, a fatherly type, worried that they would not be able to get to the village before sundown. The boys insisted that they would. The driver remained skeptical. Finally he announced a solution to his concerns. “Take my car and bring it to me Saturday night.” The boys arrived at the village well before Shabbat.

The most romantic tramping story I know happened to my youngest son. Right before going into the army he borrowed the family car to go to his yeshiva for Shabbat. Sunday morning he stopped at the hitchhiking post. There was only one trampist, a lovely girl who had been in the women’s seminary over Shabbat.  She gratefully accepted the ride and they had over an hour to get to know each other. Both were impressed with what they got to know. However, since my son was going into the army, nothing happened with the relationship. They did not forget each other, though and two years later they were engaged. They are now happy newlyweds living in a caravan in Itamar, near the yeshiva and not far from where Eliayahu Asheri grew up. My son is scheduled shortly to begin an officer’s course in the army.

It is my prayer that their commitment to the Torah, the Land of Israel, and the Jewish people, along with the commitment of so many others, will help keep our country safe and all our tramping stories will end as happily as theirs did.