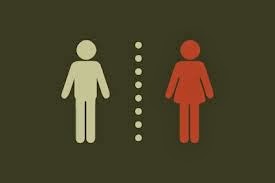 Although it was just the sleeping baby and I in the house I wasn’t sure I heard the knock on the door. I wasn’t expecting any guests. Soon the older children and my husband would be coming home for lunch but they would just knock and enter. Should I stop cutting the salad to check out if anyone was indeed there? As I was debating I heard the knock again, this time a drop more assertive. Opening the door I found a young soldier with a sheepish smile on his face. He asked if he could use our bathroom and I let him into the house.
He was in the bathroom a long time and was full of thanks when he left. It was not his gratitude that impressed me, though. Rather it was the tracks of mud he left on my once clean floor. I was still grumbling about the mess when my husband came home.

“You know,” my husband gently rebuked me. “He is helping to protect you and you did a huge kindness for him.”

I had to agree with his observation and resolved then and there to be more tolerant if anyone ever again came to the door to use our toilet. Many times through the years I have wondered what would happen if I tried doing what the soldier had done. More than once I had been doing errands in Jerusalem and become desperate for a bathroom. It is amazing how many stores do not have any facilities. As I was turned down by shop after shop I would remind myself to judge favorably and remember my father’s store.

That store was located in the small downtown of Wichita, Kansas. To get to the lavatory one needed to go through the dusty backroom, up a rickety flight of stairs, past some storage boxes, and squeeze into the square meter closet that held a rusty toilet and one bare light bulb. Outside the door was a sink that had only cold water. My father deemed it prudent to tell costumers that he did not have a bathroom rather than have them risk injury using his.

Through the years the public restroom situation in Israel has greatly improved and I never did try knocking on someone’s door as the soldier had done to mine. Now I know where most of the clean bathrooms are. Last week, though, shortly before I needed to board my bus home to Shilo I went to one of the better facilities near the main bus station. To my disappointment the women’s bathroom was being cleaned and was closed for use. There was a middle-aged man standing by the door and he noticed my distress.

“You can use the men’s bathroom,” he told me.

I just looked at him incredulously. Maybe perverts go into the wrong bathroom but not me.

I still hesitated. I did not want to board the bus without using a bathroom but to go into the men’s bathroom…

Two teenagers approached and he told them the same thing. Less wary than me they entered the men’s bathroom without hesitation. So I followed them. When I came out the man was still there, this time with his wife, waiting to finish his mission of standing guard.

Ester, what a wonderful story. I have Maddi well trained to spot the bathroom for me when we go exploring during the summer. She has become a real pro at finding me one. I was at a nursing conference once where there was one small ladies room and several much larger men's facilities. We did much the same thing, taking turns using the men's restroom and then covering the door to turn the men away!

Finding a toilet can be a big problem.  That's why I've been blogging my Pisher's Guide to Jerusalem series. Not every store has one. I've walked into some begging and finally as given staff key.

Definitely a problem at times......

Esther, Avraham and I was once took one of our sons and his wife to an outdoor concert to celebrate their anniversary. Before the event began we headed towards the bathroom and there was a HUGE line outside the women's. So my son went into the men's and told them there were tons of pregnant women waiting. The men should go outside and let the women use the facilities. Everyone listened to him!!!

Batya, Pisher's Guide to Jerusalem must be very helpful. Thanks for the plug on Ki Tisa Havel Havelim, Losing Count.