Perhaps I should be embarrassed to admit it but I was one of those goody-goody students, the kind likely to be a teacher’s pet. I liked learning and since I had no brothers or sisters I liked the socializing in school. All through grammar school I had an integral place in my class of thirty students. Junior high school was a rude awakening for me in many ways. Since a number of grammar schools fed into the junior high we became a class of over four hundred. Of course, we never learned together in one classroom but every hour had us moving from one room to another. None of us moved uniformly and each hour we had a whole new group of classmates and a different teacher. Between bells I hurried from science class to sport, from sport to social studies, from social studies to art or music, from art or music to math and from math to English. It was in English I met my Waterloo. 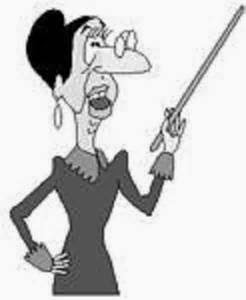 Truthfully, things started out well with Miss Clark. A grey-haired, be-spectacled woman she mirrored my love of the written word. In her classroom the seating was arranged alphabetically and I ended up under her nose in a front row seat across from her desk. We smiled at each other a lot in the beginning and she even complimented my handwriting. Things began to change after the first few weeks of school, though. Before Rosh HaShana my mother wrote out a note explaining why I would be absent from school and requesting work be given to me so I could make up what I would miss. My Catholic science teacher was more than accommodating as were all the other teachers. All except for Miss Clark.  She was rather indignant that my mother thought there was any way of making up my absence. I don’t know if it was coincidence or not but everything started going downhill after that.
Miss Clark’s seating arrangement had Dudley Long, a good candidate for juvenile delinquency, seated behind me.  He delighted not in pulling my hair, but rather yanking it. Somehow Miss Clark did not notice how he tortured me. What she did notice was that I would unconsciously swing my slip-on shoe on my foot as I did my class work.  For some reason that swinging shoe annoyed her to no end. One day she had had enough and took my shoe away. I sat through the rest of the class wondering if I would get it back or if I would have to spend the remainder of the day limping around with one shoe. Thankfully she gave it back.
She picked on me in any number of ways. When I turned the pages of my English reader too slowly for her taste she sent into the hall. On our weekly trek to the library I was the one who got yelled at when my friend talked to me. Her most ridiculous act, as far as I was concerned, happened on library day. I should have loved that library period. It was one hour set aside to read any library book of our choice.  Of course, Miss Clark didn't let us sit wherever we wanted in the library. No, she kept to her alphabetical seating arrangement. We were three to a table of six with an empty chair between each of us to discourage talking. Once again I had Dudley Long as a neighbor, along with his good friend, another juvenile delinquent in the making. Those two would spend the hour, week after week, turning the pages of Sports Illustrated or Popular Mechanics.  I, on the other hand, would read classics.
My cousin, several years older than I, had taken it upon herself to expand my reading tastes and suggested a number of titles. It was some time before Thanksgiving that she loaned me Jane Eyre . I remember eagerly opening her paperback copy, anxious to discover what would happen next. Before, I could finish a page, though, Miss Clark pounced upon me.
“You are supposed to be reading library books,” she cackled and grabbed my copy from my hands.
Mortified and worrying what I would tell my cousin, I found the library copy of Jane Eyre on the shelf. Loosing myself in its pages I was relieved that, just like with my shoe, Miss Clark returned my cousin’s copy when the bell rang. I spent the rest of the year reading my cousin’s books. I learned how to deal with Miss Clark, though. I would leave my book at home, find the library copy on the shelf, and read to my heart’s content.


To this day I don’t know if Miss Clark was anti-Semitic or just plain did not like me. I do know that I did not like her. The following year a new junior high closer to my house opened and I went there. My English teacher was young, pretty, and nice to me.  Miss Clark had retired and was no longer around to torture any students, Jewish or not.
Posted by Ester at 6:11 AM

Was I the cousin loaning books. I ran into similar problems at work one year. I was teaching at Jewish Hospital of all places, and my Dean did not think I should be off Rosh Hashana or Yom Kippur. I was appalled. I never had the same problem teaching at Loyola University. In fact one day my Dean asked if I was sure I was supposed to be here, was't it still a Jewish holiday!
I share your love of the written work. How good that witch did not destroy your love of books.
Thank you for another wonderful story.
Esther

Of course you were that cousin!!!!Thank you for all the books.